Claims which have been voted on and approved, but not yet added to the map. 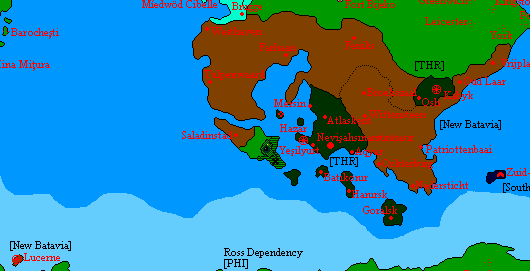 Notes: Several decendents of former IIR citizens remain in the Green in Southern Corum. They demanded citizenship rights and expansion in three protest Marches on the city of Broekszaal last month. The Government of New Batavia now wishes to apply for an expansion of territory. Most of the territory thus claimed, was once claimed by the Islamic Internet Republic, the direct predecessor of New Batavia (map versions 14.0.0 - 14.6.4). The people living in these territories, will automatically be granted citizenship on acceptance of the claim.

The governments of the South Sea Islands, Thracistan and Haifo-Pallisica have been notified of our intentions on June 4, 2021.

The governments of the South Sea Islands, Thracistan and Haifo-Pallisica have been notified of our intentions on June 4, 2021.


Awfully gracious of you

The government of New Batavia wishes to thank the council.
Top
Post Reply
4 posts • Page 1 of 1