Firstly, a second attempt at colonizing Dromosker Island led to all-out warfare against the natives. Motives for capturing and holding the island remain the same. The colonists are still actively engaged in aggressive negotiations with the natives, and discussions will conclude fairly soon.

Secondly, there's some minor expansion on the mainland, with the occupied zone taken and pacified at great cost.

Finally, the capitals have shifted around again due to internal politics, as have several internal borders. The nation's long name will change, but the short name will not. 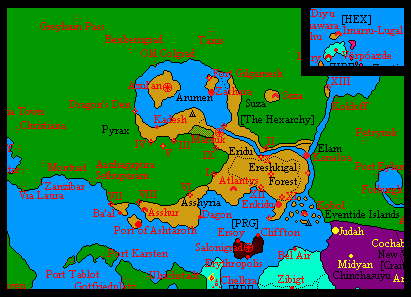 The name is somewhat indeterminate, but right now it's looking like it'll be The Hexarchy Represented by the Realms of Eridu, Suza, and the Eventide Islands. IC reasons go something like this:

Due to ever-shifting internal power balances, it's been a quirk of this country until recently where the Realms have been swapping themselves in and out of the country's official name for a while, and it'll likely remain that state of flux for the next five or ten (AN) years from now as the country gets used to the idea of being a single, unified nation-state instead of a loose confederation of waxing and waning polities.

As such, they just put themselves on official documents as "The Hexarchy" and hardly bother with the rest anymore, since otherwise the official name will not only be onerously long, but might change within the next few months anyway.

PS: The "new" Pyrax is now part of Eridu as a self-governing entity.
The Holy Ralgon Empire:
Emperor Shiro I (Ralgon) || Prince Masamune I (Adrestia)
The Hexarchy:
(Various)
Top

I mean, I was only really asking so the claimsmap legend could be updated, but if it's not concrete yet, it can always be a modification you submit later

The borders are definitely concrete, as is the short name. So it's all good there!
The Holy Ralgon Empire:
Emperor Shiro I (Ralgon) || Prince Masamune I (Adrestia)
The Hexarchy:
(Various)
Top

Thanks! I appreciate it! I see The Hexarchy being the short name for a long time to come, though.
The Holy Ralgon Empire:
Emperor Shiro I (Ralgon) || Prince Masamune I (Adrestia)
The Hexarchy:
(Various)
Top