This resubmit reduces the amount of Gotzborg land being retained on Micras by about 50%, and therefore the area to be placed under Stormark's protectorship.

His Grace Liam, the Duke of Montin
Royal Chancellor of Gotzborg

Nation: The Royal Kingdom of Gotzborg & The High Realm of Stormark 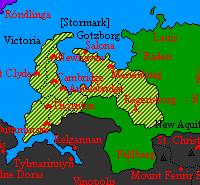 The High Realm of Stormark and the Royal Kingdom of Gotzborg have agreed that for the duration of Gotzborg's hiatus, the latter's Micran territories will be in Stormark's Sovereign Protection.

Provisions concerning the aforesaid agreement have been laid down in Chapter X of the Treaty of Bruges Bay, which has been especially inserted into the said Treaty for that purpose. You may find Chapter X below the spoiler tag.

Amending the Treaty of Bruges Bay required, in accordance with Article 16 of the Treaty, the re-signing and re-ratification of the aforesaid Treaty. This process has just been completed in both countries.

Chapter X of the Treaty of Bruges Bay

18. The High Contracting Parties hereby agree that upon the coming into effect of this Article of the Treaty, the Micran Territories of the Royal Kingdom of Gotzborg (hereafter in this Chapter to be referred to as "the Gotzer Micran Territories") shall be transferred to the Sovereign Protectorship of the High Realm of Stormark.

19. It is hereby furthermore agreed by the High Contracting Parties that the Gotzer Micran Territories shall remain in the Sovereign Protectorship of the High Realm of Stormark for the duration of the hiatus of the Royal Kingdom of Gotzborg.