The place to announce any transfers made by FMF-affiliated teams.

Following the completion of the 2018-19 season, after which the FMF is eventually able to respect the wishes of Gerenia's administrator as declared in its removal claim last year, the following changes to players aligned to Gerenian clubs have taken place ahead of this summer's transfer window:

2. All Gerenian-based foreign players are alive. These players are listed below, with their career status noted. Unless otherwise labelled as available, any free agents are currently under first refusal from clubs in their respective home nations: 3. All foreign-based Gerenians are now considered dead (or at least retired). A comprehensive list of these players is compiled below, with players being removed from teams' squads on the wiki as a result. * Jerry Rivera was Safirian and became a naturalised Gerenian when Safiria died. Hoenn is his most logical adopted nation.
Craitman H. Pellegrino, King of Craitland
COH, CrA, HGH, KOD, KY, NM, OCC, ONSGK, OSJ, SJSJ, SOB, WSA
Administrator General of the MCS
FMF President
Lord of Humour
Top

Vernon Cristaldo has been in negotiations with Dragonmoor FC. Terms have been agreed, more to follow.
Top

First refusal goes to Talenore on this one.

First refusal goes to Talenore on this one.

I can confirm I have received notice that they have waived this: 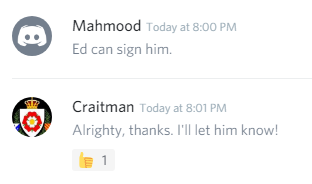 Dragonmoor FC can confirm the signing of Vernon Cristaldo .
Top

Jerry Rivera has agreed to terms with Lavaridge A.C.
Hālian, Magic: The Gathering player/baseball and gridiron fan/computer guy/conlinguist and worldbuilder/tabletop and video game fan too
Top

Craitman wrote:In transfer news from outside the Craitish top flight, international left-flanker Markko Christiansen has chosen to sign for League 2 outfit Mainlae Town for the 2020 season.

Having been unemployed following the collapse of Gerenia, where he was based with KPSK Isherwood, his newly-attached status comes only days after his inclusion in the national team's summer training squad ahead of the World Cup in Birgeshir next month. The 26-year-old started his career with Cherry Trees in 2012 before two impressive loan spells at Tellia's Les Verts Gaianiano and back home with BäJ led to a Cr 5.2 million move to Isherwood in 2015. While in Gerenia, he won a league title, and both AEFA Cup and Champions' League, and performed well enough to earn a place in the Craits' 2017 World Cup squad.

Christiansen was positive about the move, and indicated that choosing to play in League 2 would not be considered a "step down" despite his prior successes. "The club is going places and I want to be a part of it. This team has won cups and played in Benacia, but hasn't seen the promotion it deserves. We should be playing in League 1 and that has to be our goal now. There's no reason with the new [promotion-relegation] play-offs that we should settle for being in this division," he added determinedly.

If you can get confirmation from the nations' representatives that they have no intention of signing the players, then they'll become available immediately. If not, we tend to remove any first refusals once the window's over, so they'd be available in January instead